Panorama from the top of the Chamossiere

Now that the summer is truly here, we wanted to get out and about as much as possible, and explore the surrounding mountains that we usually only get to see covered in snow. In the summer everything is more accessible, as there are marked trails and paths up every peak, and you can explore some new off piste areas for the winter! 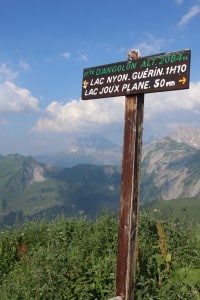 The view from the top of the Pointe d’Angolon

Today we decided to hike up to the Pointe d’Angolon, Morzine (2090m) which is situated behind the Pointe de Nyon (2019m) We started our hike from the bottom of the Chamossiere lift which you can drive up to in the summer along the Route de Joux Plane. 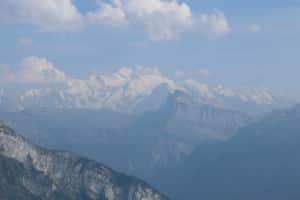 Mont Blanc in the distance

We took a fairly steep but direct path up the piste, in the heat of the afternoon, and followed it to the Col de Joux Plane.

From here you can walk up and over to the Les Gets side and the Ranfolly bowl, head to the Lac de Joux Plane and have a drink at the restaurant there, or even head down into Samoens. The Lake area is usually busy with people enjoying the views, and there’s the constant sound of cow bells from the local farm.

From the Lac, we followed the signs along a graveled path that criss-crossed the piste steeply until we reached the top of the Chamossiere chairlift. (2002m) Its pretty steep and hard going, but the views at the top are definitely worth it. From here you can see the back of Nyon, and the Lac de Nyon, as well climb up the bank to the old chairlift hut and look over the summit and even make out Mont Blanc on a clear day. With just a few clouds circling it, it made for a beautiful view. 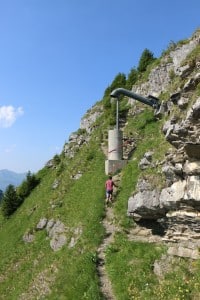 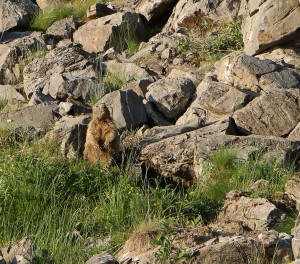 From here we scoped out a few lines for the winter, we had heard of people going off the back of the Angolon and down into Nyon that way and wanted to check it out. From this point it looked pretty steep, and we had to wait until we got to the top to really figure out a route.

From the top of the Chamossiere, you head right along the ridge line towards the Pointe d’Angolon. There’s a narrow path which then curves around the first peak, or continues up and over it. We decided to go up and over, and clambered around a gazex and along a thin path where you have to hold onto a steel wire attached to the cliff face for support. You can then climb directly along the ridge to the first peak. At the top is a weather station, and on this day a herd of sheep as well who were sheltering in its shadow away from the sweltering heat.

Follow the path along to the next ridge, where you can just make out the marker on the top of the Pointe d’Angolon, Morzine is a tiny speck below. After a while you reach the top and have a beautiful 360 degree view of the surrounding area. From Mont Blanc on one side, to the Vallee de la Manche on the other, Pointe de Nyon and the Chamossiere bowl, its a beautiful view. 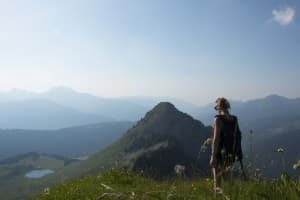 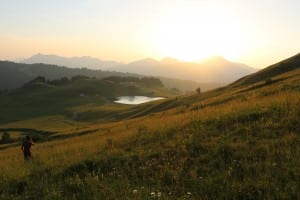 Walking down towards the Lac de Nyon

On the way down you can follow a different path down that heads along the ridge-line towards the back of Nyon. Its a bit steep in places, but there’s markers to follow, and eventually you pop out on a path that zig zags down the Chamossiere bowl to the Lac de Nyon. It is at the point that you begin to cross back into the bowl that the off piste route leads over the ridge and down towards the road that we have seen tracks leading to so many times. As we stood there we could see the possible route down, and its definitely something we would feel more confident doing now we have had a proper look at it. 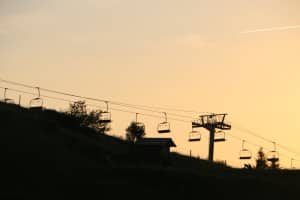 On the way down we encountered a few Marmottes. They are usually hard to spot and unseen until they start squeaking out at each other. We stopped and watched them for a bit, as they sunbathed on the rocks before continuing back down to the Lac. It was nearing sunset by this point and the colours in the sky were lovely.

From the Lac you can follow the piste back down to the bottom of the Chamossiere, and you have completed a good loop of the area. Highly recommended on a clear day. 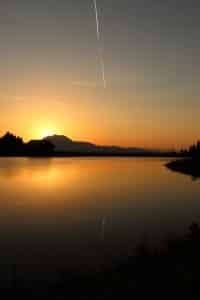