Our Chicken Massaman curry is a firm favourite with our guests, as well as with us. And this is probably down to the fact that we have been to Thailand and Malaysia, and have a genuine recipe and make the paste ourselves.
The Curry is thought to originate in southern Thailand, and to be influenced by the Malay and Muslim cuisine across the border in Malaysia. It is most commonly made with chicken, but also with duck, beef or mutton, but rarely with pork due to its Muslim roots.
It has a different taste to the usual Thai curry, due to its use of ingredients such as cardamom, star anise and cloves, originally bought to the area by foreigners and Muslim traders, and this is part of its appeal.

We travelled extensively in South East Asia for the best part of 9 months, and whilst in Thailand and Malaysia, the Massaman curry became a firm favourite. Not too spicy, but packed with flavours, we even enrolled on a Thai cooking course so we could make it the traditional way from the beginning with the paste. It may sound complicated, but once you have the paste made up you can then freeze it in batches which you can then use straight from the freezer for a delicious authentic meal. Once the paste is made the recipe is very simple, and you can recreate the hot nights of Thailand (or Morzine) in your own home! 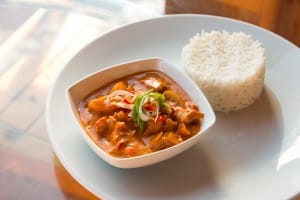 For the curry; Add oil to a pan, and cook off the paste until oils released. Add the coconut milk and lime leaves and cook through. Add the potatoes and cook for 20 mins, then add the chicken, peppers and pineapple, heat through until the chicken is cooked, around 10 minutes and serve

For the rice; Place all ingredients (except rice) in a large pan, add around 1 litre of water and bring slowly to the boil. Add the rice, stir well and cover and simmer for about 15 minutes until all the liquid has been absorbed and rice is soft but not overdone. Remove from the heat and fluff up the rice with a fork, remove cinnamon, bay leaves and cloves before serving. Use a suitable mould to make a nice neat stack of rice.

Serve the curry topped with the remainder of the crushed peanuts, sliced spring onion and chilli. Enjoy!