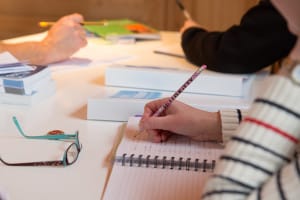 Fancy learning a new language? I have with Alpine French School

When we moved to Morzine nearly 4 years ago I was pretty much a beginner at the French language. Sure, I had learnt a little at school but never really got very far and chose to take German instead at GCSE. As most people who move to Morzine will tell you, it is very difficult to learn French as we deal with English speakers so much in our daily lives. During our first winter season here we worked for a catered chalet company. Although a British operation, they had us on French work contracts. This meant that when we contacted Helen from Lost in Translation (now Alpine French School) about lessons, she thought we may be entitled to some free classes. This was great news for the two of us as chalet wages don\’t leave much spare for taking French lessons!
Helen did everything for us where the paperwork was concerned. We just needed to sign a couple of forms and ask our employers for a company stamp. It turned out that we could both get enough free lessons to take a 12 week course with 2 hour lessons each week. We joined an elementary class for people who had previously learnt some French but essentially it was a beginner group so that we could go back to basics. The lessons were great, very engaging and really helped get us on track with the French language. All without us needing to spend a single centime!
The following autumn I contacted Helen from the french school again about taking some more classes. This time I was self employed as an Auto Entrepreneur on the French tax system. This meant that again I was entitled to a budget for French lessons. As before, Helen filled out all the forms for me and arranged my budget. The only difference was that as a self employed person I needed to pay for my lessons up front and then claim the money back. This takes around 6 weeks normally. The next course I took was a week intensive course. This was great for me as a fast learner but may not be for everyone. Certainly my husband Stu is not keen to learn in this way as there isn\’t much time between classes for the content to sink in.
Since then I have taken another 10 week course and another week intensive as well as a few private lessons. All were paid by my free budget. I am no longer entitled to free lessons as I have exhausted all of my budgets. However I am now at a good enough level of French to take the weekly conversation classes. These are 10€ for an hour session and are brilliant for practicing your French with a teacher there to help out if needed. Stu, although not a natural with languages is improving all the time and applying for his budget again at the moment. We are both much better at spoken and written French than when we arrived here and it is mostly thanks to Alpine French School. Big thanks to Helen and her team, we can’t recommend them enough!
Next Post